Plastic surgery of the nose 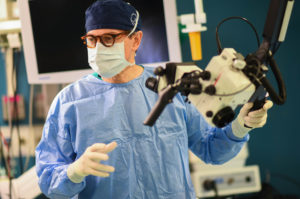 Primary rhinoplasty is an intervention aimed at aesthetic remodelling of the nasal pyramid, performed on a nose that has never undergone a previous surgery.

The nasal pyramid, which protrudes from the face and occupies the central part and is thus more visible, forms the outer part of the nose.It consists of a scaffold that is partly bone and partly cartilaginous.The bony part is formed from the nasal bones, the cartilage of the quadrangular septal cartilage from triangular cartilages and the alar cartilages.

In anticipation of a correct surgical planning an accurate preoperative visit is a fundamental requirement and includes:

• Anterior rinoscopic exams and rinofibroscopy with flexible fiberoptic instrument aimed at highlighting: deviation of the nasal septum, inferior turbinate hypertrophy, abnormal pneumatisation of the middle turbinate (concha bullosa), inflammation of the sinuses.Factors associated with the aesthetic dimorphism can condition a bad nasal breathing and an easy predisposition to sinusitis episodes

Upon completion of the pre-operative evaluation a CT scan of the facial skeleton without contrast is useful as a complementary exam to rinoendoscopy and allows an accurate assessment of the nasal septum, the turbinates and paranasal sinuses.

After the first visit, the patient will receive a report of the graphical editing of the nose that can be achieved through rhinoplasty.The project is purely virtual, is achievable as an image and is simply meant to make people understand what are the reasonable expectations of changes.

The surgery is performed under general anaesthesia.

It provides with two possible approaches, one is chosen depending on the clinical case and the discretion of the surgeon:

• The “closed” technique consists in making all incisions inside the nose

• the “open” technique instead uses a small incision at the hidden part of the nasal columella (the region that divides the two nostrils); contrary to what one might imagine to be a more modern and more reliable rhinoplasty technique

We therefore proceed to the remodelling of the whole nasal bone and cartilage edifice, with correction of defects found in the back (hump, sagging, broad nose, crooked nose), the tip (punta globosa, hypo or hyper rotated, hypo or hyper projected ), the root of the nose and of the nasal orifices so as to give a harmonic, natural and pleasant aspect to the nose.

For this purpose osteotomies are performed onspecific resorbable sutures and if necessary cartilage grafts taken from the patient himself are placed therein(usually from the inside of the nose).

Correcting all the functional defects of the nose

Rhinoplasty is therefore an extremely complex and delicate operation which requires great experience and care.

It is improper to think that the nose can be corrected by just removal of a hump or a little tweaking of the tip, because the final result is derived from the harmony of the various elements that form the nasal pyramid.Therefore, the correction of only one of these elements would emphasise slightly evident imperfections.

The project also provides for the simultaneous correction of any functional defects of the nose as the deviation of the septum, the lower and middle turbinate hypertrophy, and inflammation of the sinuses.Nasal swabs, which once made the post-operative particularly annoying and painful, are no longer used; but only thin silicon wafers are positioned between the septum and turbinates to prevent the formation of abnormal postoperative adhesions.The patient is discharged on the morning following the intervention, with a total time of 24 hours of hospitalisation, with a simple dressing including nasal plasters, and a thermo-moldable resin restraining headband positioned in the nasal pyramid for protection.

A convalescent home stay of 8-10 days is recommended to reduce the risk of postoperative bleeding.The operated patient requires outpatient medications, administered twice a week and useful to control scarring in the aspiration of intranasal secretions.

On the tenth post-operative day we proceed to the removal of nasal plasters, the bow of restraint and parasettali antisinechia plates.

The secondary or revision rhinoplasty is a surgical procedure that is performed on a nose already operated at least once without the desired aesthetic objective being achieved.

It is a highly complex surgical procedure because of scarring and surgical outcomes that determine the almost total absence of anatomical landmarks.

In revision rhinoplasty ,the patient’s concerns are noted and then the possibilities to satisfy their expectations are checked through a careful pre-operative evaluation and functional aesthetics of the nose are carefully investigated.It should be remembered that in these cases the hypothetical graphical editing has a lower reliability given the major variables that can affect the final result.

The patient who decides to undergo a revision rhinoplasty must agree to fully question the previous aesthetic result.

In most cases, the “open” approach is a reasonable one.

One of the main objectives of secondary rhinoplasty is to restore the structural support of the nose to return the lost volume from soft tissues with earlier intervention.Multiple grafts are often required to achieve this object.

Although the surgical time is particularly complex and laborious, the postoperative course is the same as that of primary rhinoplasty (see above).

On contacting the institute you will be able to request information or book a visit.