inflammatory and obstructive diseases of the salivary glands 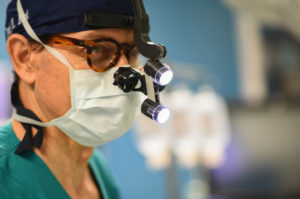 The salivary glands are divided into major and minor categories; equal and symmetrical, the parotid glands, Submandibular and sublingual glands.

The minor salivary glands are distributed to the palate, tongue, lips, cheek, the buccal floor and in lower quantities are found in the laryngeal and nasal mucosa.

The salivary glands are home to a variety of inflammatory pathologies that are neoplastic, benign and malignant.

Viral Mumps (Mumps) – Mumps is a viral infectious disease caused by the Paramyxovirus parotiditis that spreads through saliva.It mainly affects the parotid gland, almost always bilaterally, even if in different ways.The incubation period is about 20 days.The disease begins with fever followed by the appearance of parotid swelling characterised by feeling of painful tension.The disease resolves spontaneously in 10-12 days.Attention will be given to the possible extraparotid complications including meningo-encephalitis and testicular localisation which can lead to infertility.

Acute bacterial sialadenitis – Bacterial Mumps is usually caused by Staphylococcus aureus, and occurs more frequently in debilitated and immunosuppressed people or in patients with Sialolithiasis resulting in stagnation and superinfection.It mainly affects the parotid glands and is frequently unilateral.The therapy is based on the use of antibiotics, anti-inflammatory and antispasmodic medication.

Sialolithiasis – Salivary stones are limestone concretions formed from phosphate and calcium carbonate, resulting in a blockage of the excretory ducts of the salivary glands.Patients with sialolithiasis are likely to experience numerous diseases, including colic salivation concurrent with meals, with sharp pain and a sudden increase in volume of the gland.These episodes, however, tend to regress spontaneously in a few hours and a repetition of the same may promote the spontaneous elimination of the calculation (if it is of small size).In cases of non spontaneous resolution it is necessary to proceed with surgical removal.

Ranula – The ranula is a retention cyst that develops due to the stagnation of saliva in the sublingual gland.It appears as a bag covered with mucosa situated below the tongue and may, in the most serious cases, cause problems in chewing and swallowing.The solution is surgical treatment with complete or partial removal (marsupialisation) of the cyst.

Retention cyst – These occur in the minor salivary glands and are focused mainly found in the mucosa of the lips and cheeks.They appear as rounded small masses, which are sometimes responsible for various hindrances in chewing.The treatment is surgical intervention.

This is a degenerative disease of the salivary glands.Even if not associated with infection, the disease may possibly be caused due to autoimmune disorders.

Godwin lymphoepithelial benign lesion – is clinically represented by a hypertrophy of the parotid gland and/or the lacrimal glands and can be of two types: unilateral and bilateral.It predominantly affects women between the fifth and sixth decade of life.In extreme cases it can lead to a malignant lymphoma or anaplastic carcinoma.

Mikulicz disease and syndrome – is a scialoadenite disease of immune origin, characterised by hypertrophy of the parotid glands, the submandibular glands and tear glands.In cases where the Mikulicz disorder occurs in the course of systemic diseases, such as lymphocytic leukemia or Hodgkin’s disease, this it is called Mikulicz syndrome.

Sjogren’s syndrome – It is an autoimmune scialoadenite which is caused by damage to the glands that leads to production of abnormal antibodies in the blood.The disease affects all the salivary glands and tear glands.Clinically it is characterised by: keratoconjunctivitis sicca caused by the reduction in the secretion of the lacrimal glands; xerostomia, or dryness caused by a reduction in salivary production; and connective tissue diseases.It mainly affects women aged around 50 years.

DISEASES OF THE SALIVARY GLANDS

The salivary gland tumours are rare, with an approximate incidence of 3 cases per 100,000 people each year.Malignant salivary tumours account for 3%-5% of all head and neck cancers.The majority of patients affected by this disease are roughly between the ages of 60 and 70 years.

The prognosis is most favorable in cases where the tumour involves the major salivary glands, with a better prognosis for the parotid tumours in relation to submandibular glands.

We conduct complete physical ENT examination, with careful evaluation of the lesion, size, tenderness, mobility of skin and depth.Palpation of the neck allows one to exclude lateral cervical lymphadenopathy.

The project, which is implemented under general anaesthesia, involves an aesthetic incision, initially conducted in front of the outer ear and continues behind the ear ending at the hairline (face lift incision).In some cases it is necessary to extend the cut down till the neck (incision according to Redon).

A key moment of the parotid surgery is to seek the facial nerve (innervation of facial muscles) which must be isolated from the skull at the emergence and followed meticulously in all its branches so that the tumour can be completely removed without damage to the facial nerve.

In case of malignant tumours, however, you may need to sacrifice the nerve if it is infiltrated by the disease.In this condition microsurgical nerve reconstruction techniques may be useful.

It is placed at the end of a drain which allows you to collect and remove the serum and blood from the wound.The discharge of the patient takes place as a function of time when the drain is removed, approximately 3 to 5 days after the operation.

Although the surgery is thorough some post-operative complications are possible:

Stupor of the facial nerve, or a wild reduction of facial movement after the operation, a transient condition in most cases caused by a numbness or “stupor” of the nerve due to surgical stress.

Numbness of the ear, a complication caused by surgical trauma borne by the great auricular nerve.

The surgery is performed under general anaesthesia.It provides for a reduced skin incision, 2 cm below the mandible, usually hidden by the neck folds.

The surgery requires great experience and a thorough knowledge of anatomy, as there is possible damage to the facial nerve due to the partial control of labial, lingual and hypoglossal nerves.

At its end a drain is placed which allows you to collect and evacuate the serum and blood from the wound and the patient’s discharge occurs as a function of the time from when the pipe is removed, usually three days after the operation.