Cancers of the throat: larynx, pharynx and oral cavity 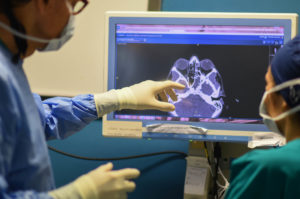 Tumors of the head and neck make up about 3% of all cancers and in Italy each year 12,000 cases are presented, in particular, affecting those who abuse alcohol and tobacco.

They can have serious consequences for the patient, who also lose the functionality of the essential parts of the body.Most of these tumours originate in males between the sixth and the seventh decade of life and may develop in different areas, such as: the oral cavity, the pharynx (in any of its three components nasopharynx, oropharynx, hypopharynx), larynx , nose and paranasal sinuses, salivary glands, thyroid gland, nerve structures and lymph nodes of the neck.

Depending on the anatomical site, the symptoms occur in a different way.In many cases, however, these tumours evolve from initially scarce and trivial symptoms.Symptoms that may direct one towards the diagnosis are:

The laryngeal cancer is the most frequent of the head and neck tumours; the larynx is involved in the mechanisms of breathing, speaking and swallowing, constituting a core tube structure interposed between the breathing path and path for the transit of food (pharynx, esophagus).In rare cases, the tumour is manifested by the lack of breath: you can experience the sense of breathlessness during the night, under stress or in the case of a considerable size of tumour, along with respiratory difficulties even in rest conditions.

The cancer of pharynx affects the channel that allows the passage of the food bolus from the mouth into the esophagus through the swallowing mechanism.The tumour may be of interest in one of its three portions: the nasopharynx (the upper part, which deserves separate attention – see below), the oropharynx (the middle part) and the hypopharynx (the bottom part).The tumour is often accompanied by a feeling of discomfort or pain in the throat, sometimes it extended to the ear because of the presence of nerve roots.They can also present difficulty in swallowing, bad breath, voice alteration and abundant production of saliva; or, as in about half the cases, it begins with one or more swollen neck lymph nodes.

The symptoms of nasopharyngeal cancer are rather special: in the initial stage of the disease the symptoms are almost irrelevant.Depending on the location, the patient may experience hearing loss, buzzing, whistling, recurrent ear infections and feeling of closed ear.Often the first sign of disease is precisely the appearance of a swelling in the neck, a sign of infection of nodal regions.More rarely, however, the patient may also experience symptoms of nasal respiratory obstruction, with the stuffy nose sensation and abundant nasal secretions sometimes mixed with blood.In more advanced cases of the disease, when it strays from the nasopharynx going to affect the deepest part, i.e. the endocranial regions, the throbbing headache (even violent, and one that does not respond to common treatments), loss of smell and decreases in vision or double vision.

In the case of oral cancer, affected areas include the tongue, the gums, the inner surface of the cheek, the lip, the lower part of the mouth, the palate or the region located over the wisdom teeth.The symptoms are often hazy: the patient may experience the presence of a mass or swelling; You can notice slight bleeding or presence of small blisters, ulcers or painful wounds that are struggling to heal.In the case of advanced disease progression intense pain, inability to stick out tongue, tongue deviation or, in extreme cases, inability to open the mouth can be felt.Determining symptoms are serious halitosis, profuse salivation, saliva mixed with blood and the onset of swelling of the lymph glands under the jaw and/or neck.

In tumours of the sinuses (nasal cavity, maxillary sinus, ethmoid region), a sense of progressive nasal obstruction prevails, mostly unilateral and continuous blood dripping or nosebleeds; in some cases the disease is manifested by pain, altered sensitivity of the skin of the face, irregular swelling of the face, double vision and unmotivated tooth mobility.

Early diagnosis of the disease is crucial.To this end, our Institute has complete and latest generation instrumentation:

Radiology plays a key role in diagnostics.It allows you to perform tests such as ultrasound, computed tomography (CT), magnetic resonance imaging (MRI), positron emission tomography (PET) and CT-PET.These exams are very important for accurate staging of the disease, for the orientation to therapy and the subsequent evaluation of the results.

Clinical examination: usually includes the exploration of the oral cavity either directly or, in the case of structures not accessible to the naked eye, with the use of an optical fiberscope.The use of fiberscope is an endoscopic technique, as is the use of a small flexible tube with its own lighting end, which is introduced into the nasal passages to allow full exploration of the entire ENT area.It is especially useful for the study of the pharynx, larynx and sinuses.In many cases, the use of the fiberscope allows to perform the biopsy directly.The clinical visit, must also include palpation of the suspected lesion, in order to assess the degree of infiltration of the disease.Finally, it requires a careful exploration of lymph nodes by palpation of the neck, in order to define the possible extension of the disease to the lymph nodes.

Biopsy: The extraction of a small piece of “suspicious” tissue that will later be sent to the laboratory for microscopic analysis.It is an indispensable diagnostic procedure for the diagnosis of tumours.It is also useful for precise histology of the disease.

Endoscopy under anaesthesia: is carried in cases where the diseased area cannot be easily navigated or the patient is unable, for various reasons, to undergo endoscopic manoeuvres.The procedure is in fact performed while the patient is unconscious.In this way, you can make an accurate assessment of the extension of the disease.The examination, under general anaesthesia allows, without a doubt, a very comprehensive and accurate assessment of the entire upper aero-digestive tract, including the esophagus and trachea.

Fine-needle aspiration: consists of a sample of tissue being extracted through a thin needle.The needle orientation takes place under the guidance of ultrasound.

After the diagnosis of the nature of the tumour, the patient undergoes further tests to confirm the extent of the disease; the set of these exams is called “staging” and includes: ultrasound scans, computed tomography, magnetic resonance imaging, chest X-ray and PET.

For the treatment, surgery is the stronger and more effective weapon and most used procedure in the treatment of these tumours; it includes both the resection area concerned and the removal of the lymph nodes of the affected region.You can attack the tumour with conventional surgery, along with endoscopic and modern microsurgery and with the use of different types of lasers.Surgical Laser (our advice is available for both the CO2 laser and diode laser) is now an instrument of great efficiency both in endoscopic procedures and in the open surgeries.Although they are often complex and complicated surgical procedures, modern technologies help to preserve in almost all cases the main functions (voice, swallowing) and the patients’ appearance without resorting to severe or permanent disability due to the tracheotomy or other serious mutilations.In special cases, where you need an extended surgical demolition, the intervention is completed by reconstructive surgery, realised, in almost all cases, in the same operative session thanks to a double surgical team.

In surgical demolition involving the destruction of nerve structures, in some cases, the surgery involves the recovery of another nerve, generally the sural nerve, to allow the reconstruction of the facial nerve itself, always in the same operating session.

Radiotherapy and chemotherapy, as per the competence of each of the specialists, are other key instruments, equally or more effective, in the treatment of these diseases.The use of different forms of treatment, characterises the so-called therapeutic protocols.At the San Raffaele Hospital, the protocols are always evaluated in multi-specialist meetings for each patient.Each case is discussed by a medical team comprising an otolaryngologist surgeon, radiation oncologist and medical oncologist.

At the San Raffaele Hospital, Tomotherapy, a highly complex radiotherapy treatment that allows you to selectively sculpt the dose on the target, reducing exposure and risk to the organs, is used.It also allows them to reduce the total duration of treatment and the execution of “dose escalation.”

The cured patients are then placed on a continuous, precise and meticulous monitoring program.