DISEASES OF THE NOSE 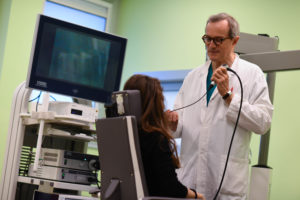 The nasal cavity or nasal passage are presented as two channels separated by an bone cartilage called the nasal septum.They vommunicate with the outside by means of the nostrils and open rearwardly in the nasopharynx at the middle choanae.

The side wall of the nasal cavity presents an uneven surface: on it, in fact, it consists of 3 bony laminae (sometimes 4) coated with mucosa.An inferior turbinate nasal cavity, a middle turbinate, a swirled higher and sometimes a supreme turbinate is recognised in each one.

The underlying space beneath the turbinates are called meatus, where communications occur with the paranasal sinuses.The paranasal sinuses are pneumatised cavities of the facial mass that develop during the first few years of life and are continuous with the nasal passages.They include:

The nasal functions are different:

Several assumptions have been made on the function of the sinuses:

INFLAMMATORY DISEASES OF THE NOSE AND SINUSES

rhinitis – The most common form of acute inflammation of the nasal fossa, represented by acute rhinitis epidemic.This disease is commonly known as cold.It is supported by a viral etiology, particularly rhinovirus and parainfluenza virus.It is characterised by nasal respiratory obstruction associated with abundant nasal secretions.Possible bacterial infections are characterised by muco-purulent secretions.It should be remembered however, that medical therapy depends on anatomical factors (deviation of the nasal septum, hypertrophy of the inferior turbinate, pneumatisation of the middle turbinate) that can facilitate a poor nasal ventilation, with activation during acute and chronic inflammations, these factors are the subject to surgical correction (see malformative and post-traumatic maxillo-facial pathology).

A form of rhinitis with similar symptoms as the allergic reaction but not related to allergens is the pseudo-allergic or vasomotor rhinitis.In this case the symptoms described above are triggered by thermal, chemical, optical or mechanical stimuli(e.g. exposure to light, heat, cold etc).The aforementioned medical therapy has little effect, very often it is necessary to decongest the inferior turbinate through diathermic or radio frequency surgery(see turbinoplasty).

Sinusitis – Sinusitis is an inflammation of the sinuses.There are three types of sinusitis: the first is acute sinusitis, a type of inflammation which has rapid onset and can be treated with appropriate medical therapy; the second is the sub-acute sinusitis that lasts for periods up to three months and is also treatable with specific therapies; the third is chronic sinusitis, and occurs due to repeated acute episodes or previous infections that were treated poorly.Sinusitis can be viral, bacterial or fungal.

In the genesis of sinusitis a number of predisposing factors such as: structural alterations of the nose; immune deficiencies; dental infections and more are still considered as initiating aspects.The most common symptoms of sinusitis are: frequent purulent nasal secretions, pain in the facial region localised according to the affected sinuses, reduced or absent olfactory abilities.In addition to a thorough investigation of the symptoms reported by the patient, fibroendoscopic diagnosis is important for the examination, made with flexible fiber optic instruments, and a CT scan of the facial skeleton.Finally, on the basis of the clinical picture (acute, subacute, chronic), the age and the patient’s state of health, tolerance to certain types of medications, procedures or therapies, treatment of sinusitis can be formed from medical treatments or surgical therapies

Nasal polyp – It is a multifactorial disease characterised by edematous reaction of the nasal submucosa with polyp formation.

The diagnosis is made using endoscopic nasal examination with flexible fiber optic instrument that verifies the extent of polyps and the degree of their effect on the nasal passages.The CT scan of the facial skeleton without contrast and allergic tests are useful for more accurate treatment planning.

On the basis of the clinical picture (extent and severity of polyposis), age and state of health of the patient, tolerance of certain drugs, procedures or therapies, treatment of polyps can be based on:

There are no external cuts nor are nasal swabs used .The patient is discharged on the next morning of the operation, with a total time of hospitalisation being 24 hours.A convalescent home stay of 8-10 days is recommended to reduce the risk of postoperative bleeding.The operated patient requires outpatient medications, administered twice a week and useful to control scarring in the aspiration of intranasal secretions.

DISEASES AND POST-TRAUMATIC MALFORMATION OF NOSE

Included in this category of pathologies is deviation of the nasal septum, which is a misalignment of the bone cartilage that separates the two nasal cavities.It can be caused by a disharmonious development of the facial skeleton, in which case it is called congenital deviation, or nasal trauma that may also occur during childhood, in this case the deviation is termed as acquired.The deviation of the septum is often accompanied by a compensatory hypertrophy of the turbinates in the opposite nostril due to the convexity of the septum.

The patient shows difficulty in nasal breathing, which will therefore be associated with oral breathing, nocturnal snoring, frequent episodes of rhinitis and, in some cases, sinusitis, favoured by poor ventilation, which in turn determines one continuous state of inflammation of the sinuses and the nasal mucosa.

The therapy is exclusive surgical correction by means of the baffle plate.The surgery is called septoplasty and aims to improve the patient’s nasal breathing.

The surgery is performed under general anaesthesia and involves a small incision inside the nose (which is thus invisible), the elevation of the mucosa that covers the nose and remodelling of the same by removal of part of cartilage and bone.

The use of nasal swabs, which make the post-operative care particularly annoying and painful is not required, but only thin silicon wafers are used and inserted between the septum and turbinates, thereby preventing the formation of abnormal postoperative adhesions.The discharge of the patient takes place the morning after the day of intervention, with a total time of 24 hours of hospitalisation.

A convalescent home stay of 8-10 days is recommended to reduce the risk of postoperative bleeding.During the course of convalescence we proceed with the removal of the plates.

It is important to note that septoplasty does not in any way alter the aesthetics of the nose, but is intended solely for functional correction.You can, if the patient desires, add a procedure to incorporate aesthetic correction of the nasal pyramid (see Rhinoplasty).

They are characterised by nasal bleeding (nosebleeds), swelling of the nose, and in some cases are associated with skin wounds and/or other fractures of the facial skeleton.

The early detection of a fracture of the nasal bones allows rapid treatment by surgical reduction.The reduction of the fracture allows a realignment of the bone stumps.The operation must necessarily be performed within 7-10 days after trauma, since, after this period, it is no longer possible to realign the nasal bones because of abnormal consolidation of the bone segments.In these cases it can result in dimorphism of the nasal pyramid, solvable through rhinoplasty (see Rinoplasty).

tumourS OF NOSE AND SINUSES

In the facial skeleton there are different histological structures, which can give rise to different types of cancer.

Benign tumours – Among the benign tumours of the nasal cavity and paranasal sinuses include fibroids, bleeding fibroangioma, osteomas (in the bone with frequent localisation in the frontal sinus) and papillomas.A particular form of papilloma is the so-called inverted papilloma: it is a benign neoformation characterised by a singular tendency to increase in depth with possible erosion of the surrounding bone structures.Its treatment is only surgical through modern nasal endoscopic technology, which allows the complete removal of the tumour in a rather traumatic and non demolishing manner.

Malignancies – Malignant tumours of the nasal cavity and paranasal sinuses account for 1% of all malignancies.

Particular occupational exposure (mainly woodworking and leather) induce chronic persistent inflammation, which causes progressive paralysis of mucociliary system.This determines an increase in the duration of the contact with the carcinogen, which with time may lead to the malignant transformation of some cells.

Sinonasal tumours involving this area are a part of the physiology of the face along with eyes, meninges and the skull contents.Therefore both surgical and radiotherapy treatment risk becoming excessively offensive and destructive.Early diagnosis is essential.

From the histopathological point of view the following symptoms are recognised:

Diagnosis is based on subjective symptoms, which must be assessed very carefully:

This symptom, however, is more easily attributable to common rhinitis or rhinosinusitis, and therefore it is often a late diagnosis of cancer, at the onset of the so-called signs of externalisation or secondary adenopathies.

Endoscopic nasal examination with flexible and rigid instrumentation fiber optic displays is essential for diagnosis and allows direct biopsy of the tumour.

The imaging or radiological evaluation is performed with CT of the facial mass and MRI with contrast medium, which allow one to precisely define the extent of disease and the best treatment plan.

The therapeutic weapons at our disposal make use of surgery and radio and chemotherapy.

The surgical therapy uses endoscopic techniques, with the aid of dedicated and laser technology, along with traditional surgical techniques, depending on the choice of the tumour by particular conditions in question.

In larger forms, demolition of bony structures of the facial skeleton is required.

It is useful (with the exception of rare early forms) for mapping post-operative radiotherapy treatment.

The exclusive chemo-radiation treatments are reserved for only extra surgical cases.