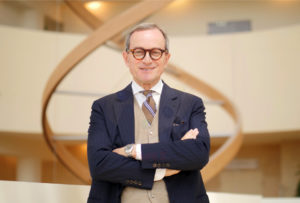 He later obtained a university degree in “Restorative Maxillo-Facial Surgery and” at the Paris VI University (Univ.Pierre et Marie Curie) in Paris in 1986.

For his professional investigation, Professor Mario Bussi spent periods of study and attendance at many of Hospital and University centres in North America and France, including the Sloan Kettering Memorial Cancer Centre in New York, the Manhattan Eye, Ear and Throat Hospital in New York, the Straith Memorial Hospital in Detroit, the Institut Gustave Roussy in Paris and many others.

In addition, he carried out research in various areas of specialities, but especially oriented to the study of cancers of the head and neck, radical surgery and plastic reconstructive surgery, immunological ENT problems (in oncology, Waldeyer ring, in the upper airways) and psycho-oncology.

His surgical experience is well documented when he was at the ENT Clinic of the University of Turin (where he was Assistant Professor and then Associate Professor since 1978) and then at the IRCCS San Raffaele in Milan, and has conducted over 14,000 interventions and he was the primary surgeon for a majority of these surgeries.

SAN RAFFAELESTUDIO DI MILANOSTUDIO DI TORINO
This site uses cookies profiling, own or others, to send targeted advertisements. If you want to learn more or opt out of all or some cookies, click here. If you access any element underlying this banner you consent to the use of cookies. Accept